Despite so much trepidation heading into the Rio Olympics  the most infamous scandal was fabricated by Ryan Lochte, a fraternity party that fell into a pool. What happened to all the gastrointestinal fireworks we were promised? I was expecting browned pools and vomit-filled sprints, but all I got was amazing competition and record-breaking performances. Thanks for nothing, Rio! While all the concern may have been for naught, the location of the games can actually impact the sports themselves. Where should the Olympics be hosted if we want to break more records? I’m talking about a location where circumstance and nature combine to create an environment that favors the athlete. Where, scientifically, should individual Olympic games be held?

Running: Don’t be afraid to get sand in your shoes.

We’re starting off with the most well known example. Marathons and any extended running event should occur at sea level. Many of you are aware that professional runners often train at high altitudes, but do you know why? Take a look at this diagram from national geographic. 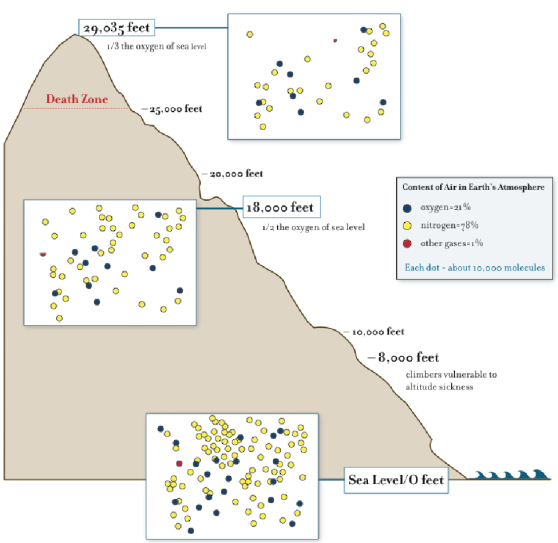 You’ll notice that oxygen is at a lower concentration at higher elevations and vice versa. This is because the Earth’s atmosphere presses down on everything under it, including oxygen. Thus, oxygen at lower elevations is concentrated by the atmosphere above it. Runners train in high altitude, low oxygen environments so that their bodies start manufacturing more red blood cells, which contain the oxygen-carrying hemoglobin protein. More red blood cells means more hemoglobin, and a better ability to transfer oxygen to your muscles when you need it most. When runners compete at sea level their bodies are still producing hemoglobin as if they were at high altitude, boosting the benefit they receive from the high-oxygen environment.

Swimming: Get your float on at the Dead Sea.

Catch people dipping into the Dead Sea and they’ll probably look like this:

That’s not an optical illusion. You’re more buoyant in the Dead Sea because of its high salinity, or salt content. The more salt there is dissolved in water, the denser it becomes and the less water you displace as a result. You can easily demonstrate this principle at home by floating eggs. How does this help swimmers? The higher the salinity, the more buoyant they are and the less drag they create cutting through the water, creating faster swim times. Hold Olympic swim meets in the Dead Sea, and watch the records fall.

Weightlifting: Lighten your load by getting lightheaded.

This Olympics, Lasha Talakhadze of Georgia set a new world record by lifting 473 kilograms, or 1,043 pounds! However, this record was heavier than it needed to be, because it occurred around sea level. Newton’s law of universal gravitation reveals that the force of gravity on objects is inversely proportional to the distance between them. In other words, the farther apart any two masses are, the weaker the force of gravity attracting them. For Talakhadze, the farther those 473 kg are from the center of the Earth, the lighter they will be. Because Earth has an equatorial bulge, a weightlifter wants to be on the highest mountain closest to the equator (think Mt. Kilimanjaro). Here, the force of those 473 kg is about 18 Newtons (or 4 pounds) less than at sea level because the gravitational acceleration, the rate at which objects fall to Earth, is not 9.8 m/s2 but more like 9.76 m/s2. Those 4 pounds may not seem like much, but it more than makes up the difference between the previous record of 472 kg.

We’ve exhausted the simple, straightforward methods to boost athletic performance. Let’s start getting creative and travel back in time. Imagine all the beauty and splendor of jumping and dressage; but instead of horses, the athletes are riding these majestic beasts:

That’s Megalocerus giganteus, or the extinct Irish Elk. Actually a kind of deer, these megafauna roamed Eurasia during the Pleistocene epoch. Riding Irish Elk to Olympic glory would smash current records and turn every competitor into a gallivanting version of Thranduil from The Hobbit. There are even people spearheading de-extinction efforts to bring them back. Of course at that point the athletes are no longer equestrians, but rather megalocerians!

In the object of balance, let’s take a trip to the future to round out our ideal Olympic venues. Depending on humanity’s response to global warming, rising seas could threaten the billions of shoreline denizens through flooding alone! Check out these interactive maps to determine just how close to disaster your favorite coastline is. Of particular curiosity, the southern tip of Florida will be wiped clear off the map if carbon emissions remain unchecked.

But when man’s hubris drowns you in lemons, make Olympic lemonade! We could easily turn downtown Miami into a sailing course for future Olympians. Picture the excitement of navigating a dystopian floodscape!  At the very least, sailing will become less Matt Damon in The Talented Mr. Ripley, and more Kurt Russel in Escape from L.A.

Austen is a 6th year graduate student and member of Science ACEs. His dream is to go fishing every day once he’s finished with this bacterial pathogenesis thing. You can follow him on twitter @austenleet.